Ancient South Africa has left us a rich past from prehistoric cultures who made its mountains and plains their home. Their fossilised remains were found in the Sterkfontein caves, now renamed the cradle of humankind, just north of Johannesburg.

The country is in fact an extraordinary rich store of fossil evidence of the evolutionary history of humans, going back several million years. From the Christian creation point of view however, the evolution theory is still strongly debated.

In 1924 near the village of Taung in the North West a labourer in a limestone quarry found a small fossilized human-like scull. His find was sent to professor Raymond Dart, head of the anatomy department of the University of the Witwatersrand for further examination. He realised that the scull was something out of the ordinary.

He discovered that next to ape-like features, the scull also showed features that were distinctly human. The teeth showed that the scull was that of an approximately three year old child. But most significantly, he found that the child had been able to stand and move on two legs. 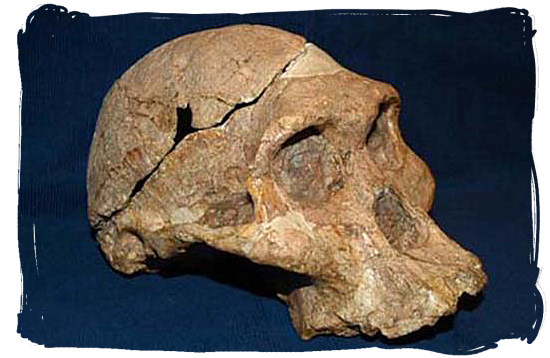 Believed to be 2,5 million years old, this fossilized scull known today as Mrs. Ples, was found in the Sterkfontein caves, at the "Cradle of Humankind" just north of Johannesburg
copyright © Maropeng visitors centre


Professor Dart named what is known as the "Taung child": Australopithecus Africanus, meaning “southern ape of Africa”, although he was convinced that the "Taung child" belonged to the very first ancestors of humankind.

In 1947 Dr. Robert Broom discovered the almost perfectly preserved fossilized scull of an adult Australopithecus Africanus, known today as Mrs. Ples. This 2,5 million years old scull was found in the Sterkfontein caves, in the area known as the “Cradle of Humankind” just north of Johannesburg. 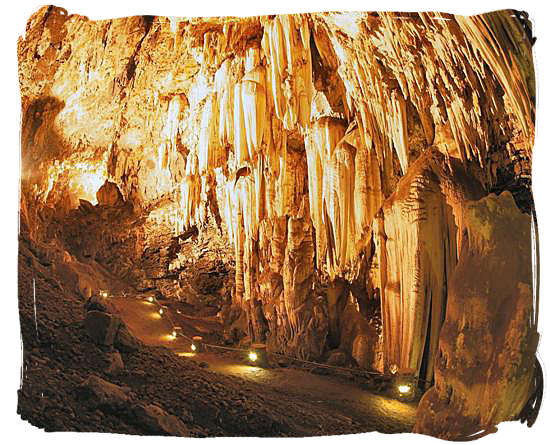 The interior of the Kromdraai caves, another treasure chest of hominid fossils, situated nearby the Sterkfontein caves in the “Cradle of Humankind” region
copyright © South African tourism


In more recent times from 1994, Dr. Ron Clarke, Stephen Motsumi and Nkwane Molefe have painstakingly excavated the world famous fossil “Little Foot”, also belonging to the species Australopithecus. This virtually complete skeleton was found at the Sterkfontein cave area, lying in the very spot where the creature died, between 3 and 3,5 million years ago. 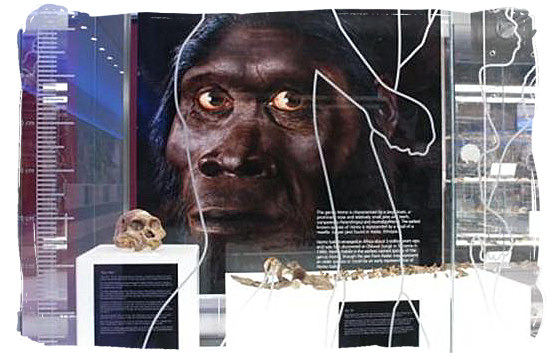 
The earliest ancestors of humankind are known as Australopithecines, commonly known as ape-men and believed to have evolved some 5 million years ago. These creatures had an ape-like appearance with human characteristics like standing and moving on two legs, while retaining their climbing ability. This gave thema crucial advantage in the struggle for survival, enabling them to live in both forested areas and on theopen savannahs. 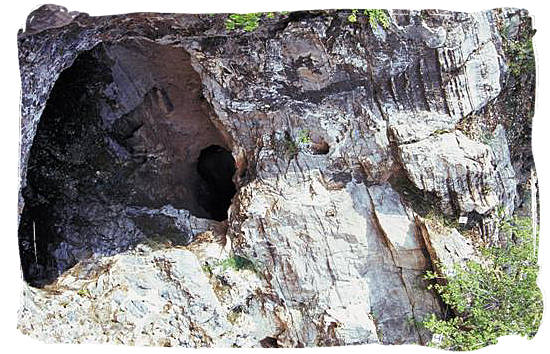 
The following development was the emergence of "Homo habilis", approximately 2 million years ago. Called "handy man", Homo habilis is believed to have been able to make and use tools and to communicate in a rudimentary language. As the "father of culture" he is one of the true early ancestors of today's Homo sapiens.

In 1949 it was again Dr. Robert Broom who found fragments of early hominid fossils at Swartkrans, also part of the region called "The Cradle of Humankind", this time associated with stone tools. Later these remains were classified as belonging to "Homo habilis" 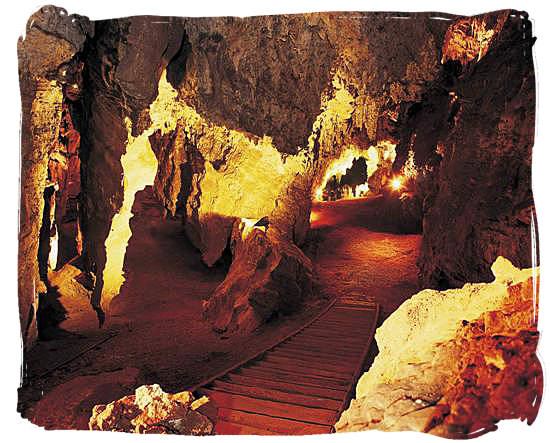 The interior of the Sterkfontein caves, known today as the "Cradle of Humankind" near Krugersdorp, is a rich store of fossil evidence of the evolutionary history of humans
copyright © South African tourism


The same year, also at Swartkrans, Dr. broom and his co-worker T J Robinson found fossils of another new early hominid, called "Homo erectus", the immediate ancestor of early "Homo sapiens". They evolved about one million years ago and were able to make large stone tools, hand axes and cleavers.

In addition "Homo erectus" mastered the art of making fire and is believed to be the first hominid to leave Africa, colonizing the entire "Old World". Eventually "Homo sapiens" evolved onto the scene some 150,000 years ago. It is in South Africa that the world's oldest remains of our own species, Homo sapiens, have been found, some 60,000 years before their arrival in Europe and Asia. 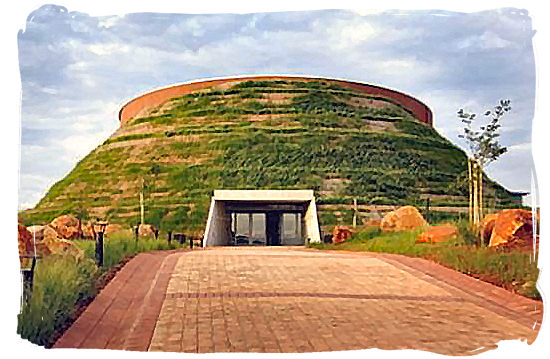 Front view of the Tumulus Building of the Maropeng visitors' centre at the Cradle of Humankind, designed to look like an ancient burial mound. Named Maropeng in the Setswana language, ("the place where we once lived"), the centre is designed to help tourists, schoolchildren and others explore the rich fossil heritage of the area.
copyright © Maropeng visitors centre


In recent years South Africa has again yielded discoveries of human remains which have caught the attention of the world. At the Klasies river caves along the Eastern cape coast and the Border cave in KwaZulu-Natal, human remains with anatomically modern features have been found, dating back well over 100,000 years.

The Sterkfontein area in South Africa where most of the discoveries of early hominid fossils were made, is one of the world's most productive and important paleo-anthropological sites. Known today as the "Cradle of Humankind", the 47,000 hectare Sterkfontein valley lies between nondescript hills, covered with scattered shrubs and trees about 40 km north west of Johannesburg.