Below is a list of all the countries of the African continent. Clicking on anyone of them, will give you access to an interactive map of that particular country.

The African continent comprises a vast rolling plateau, extending from the Atlas Mountains to the Cape of Good Hope. Just 10 percent of Africa’s land area lies at less than 500 ft above sea level, compared with 54 percent of Europe and 25 percent of North America. Only in the extreme south and north have great folded mountain ranges been build up.

Elsewhere in the continent differences in elevation have been caused either by the faulting which produced the Rift Valley, or by the creation of the enormous river basins, notably those of the Congo, the Niger, the Nile, the Volta and the Zambezi, which are prominent features of the geography of Africa.

At its periphery the plateau gives way via steep escarpments to the narrow coastal plain that surrounds the continent. All the great rivers of Africa, except the Niger-Benue and the Zambezi-Shire systems, plunge in falls or rapids over the escarpments, making effective navigation inland from the sea impossible.

Map of Africa showing its countries and capitals 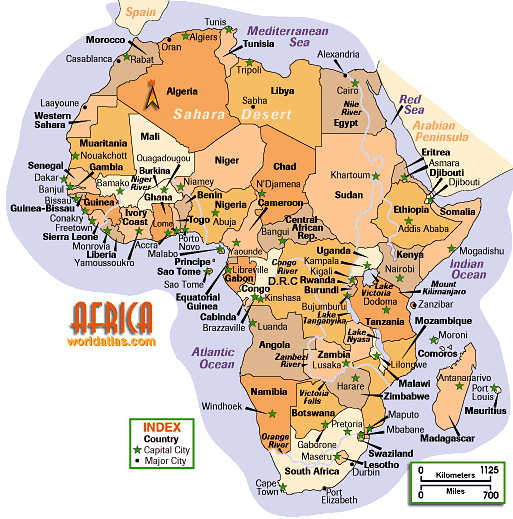 The two satellite view maps below, the one of the African continent and the other one of the world globe, illustrate where and how Africa is positioned among the other continents.

Satellite view of the African continent 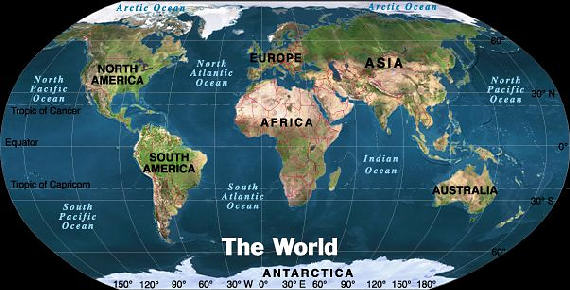 The map of Africa would not be complete without some interesting facts and figures that are part of the geography of Africa.

Largest city,...The largest city in Africa is Cairo, the capital of Egypt, with a population of approximately 9,2 million people.

Highest point,...With a height of 5,963 meters, (19, 349 feet) the Mount Kilimanjaro with its permanently snow capped summit is the highest mountain in Africa, situated in Tanzania.

Deepest lake....With a maximum depth of 1,436 meters (4,610 feet) Lake Tanganyika is the deepest lake on the African continent and second deepest world-wide.

The Great Rift Valley in Africa....The Rift Valley is more than 4,830 kilometers (3,000 miles) long and stretches between Syria in the Middle East and Mozambique in the southern part of Africa. The breadth of the valley ranges from a few km to over 160 kilometers (100 miles). In the eastern part of the continent the valley branches into two, the Western Rift and the Eastern Rift. The geological earth surface fracture in which the Rift is located is unstable and shifts from time to time.

Lake Malawi....The lake with the largest variety of fish species anywhere in the world, is Lake Malawi. It is estimated at over 500 species from ten categories or families,... including 30% of all known cichlid species.

Namib desert....The oldest desert on the African continent and the only one that is home to populations of Lion, Giraffe, Rhino and Elephant among others, is the Namib desert.